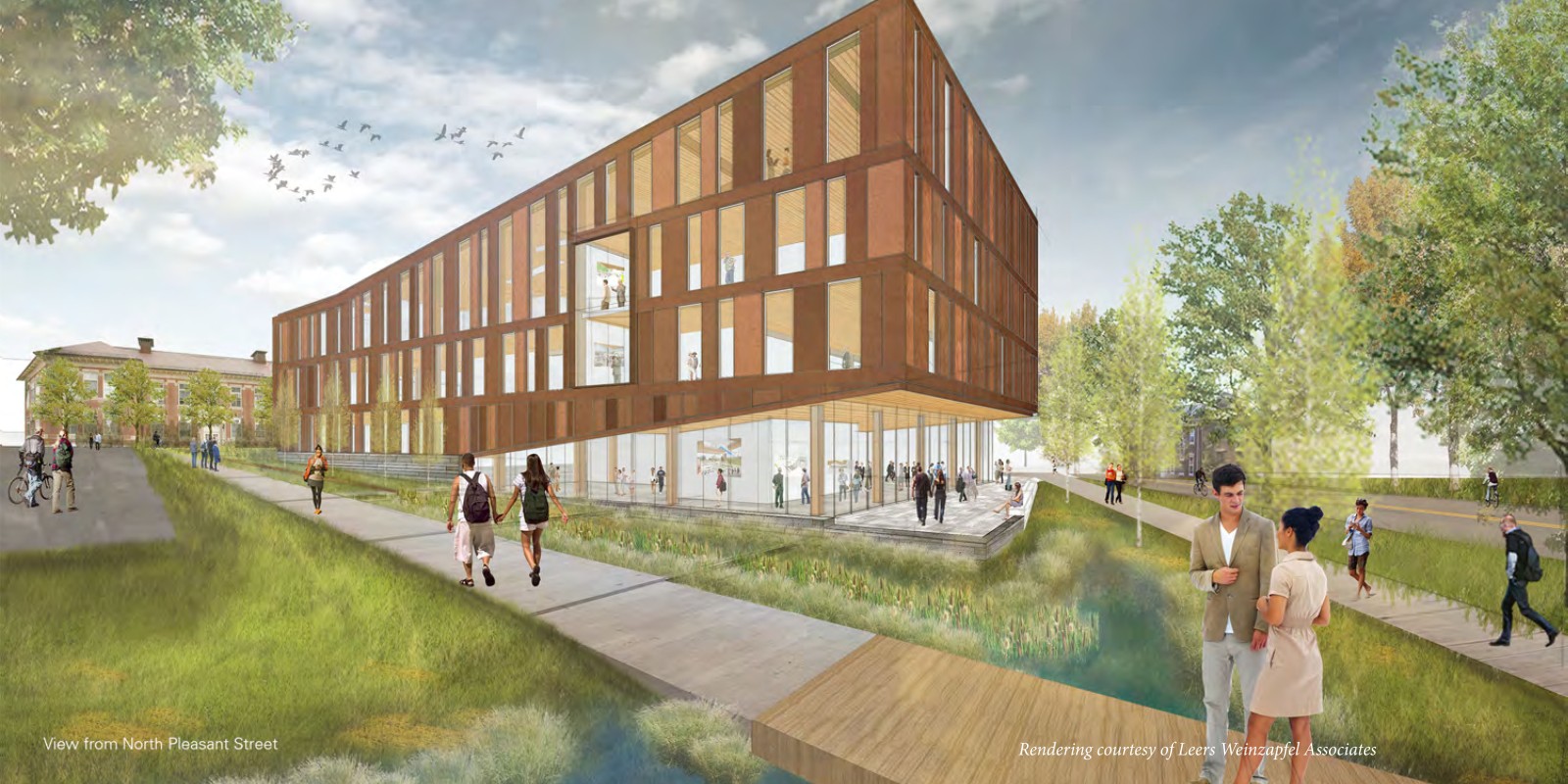 Two-thirds of Chicago was constructed of wood when a devastating fire ripped through the city 144 years ago this week.

The three-day fire killed 300 people, destroyed 17,500 buildings and paved the way for the kind of steel and concrete construction that dominates the industry to this day. In fact, Chicago’s 10-story Home Insurance Building became the nation’s first steel “skyscraper” 13 years after the fire. Owners and architects hardly looked back at wood.

The Great Chicago Fire also prompted new building codes in cities across the country that still hamper the widespread adoption of modern wood construction. But that’s beginning to change as recent research has found that new innovative heavy timber systems are, in fact, safe in fires. Moreover, these systems are environmentally friendly and can rise as high as 12 stories or more. Advocates of this high-tech wood construction, known as “mass timber,” are forcing regulators and owners in the United States to take the resurgence of timber-frame construction more seriously.

“This is the future of construction,” Robert Malczyk of Vancouver-based Equilibrium Consulting told us.

While mass timber has been hugely popular in Europe for years, due in part to more progressive building and environmental regulations, it still hasn’t caught on here. But a major victory for an American resurgence of wood construction was recently won in Massachusetts. The University of Massachusetts in Amherst received a variance to the state building code to build an 86,000-square-foot mass timber building. 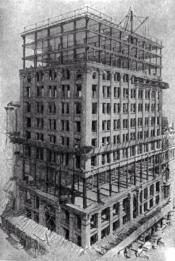 The $52 million Design Building is believed to be the first of its size in the U.S. to feature an innovative wood system known as cross-laminated timber, or CLTs, which are used as part of a composite wood-concrete floor assembly.

When the structure is complete in 2017 it will provide major ammunition for proponents of modern wood construction who are quick to note that CLT slabs make the 2x4s in your house look like toothpicks.

It will be to wood what the Home Insurance Building was to steel.

“The UMass Design Building will act as an ambassador,” Malczyk, who is consulting on the project, said. “People will be able to walk in the building and have this moment where they realize ‘Wow, wood doesn’t have to be like in our houses.’”

High-tech wood beams known as cross-laminated timber, or CLTs, are being used in the UMass Design Building. CLTs are prefabricated and customizable slabs featuring three to nine layers of lumber glued together under high pressure. CLTs are as strong and sturdy as traditional construction materials and can be used for walls, roofs and floor panels. (Photo courtesy of ReTHINK Wood)

When owners and architects finally step foot into the UMass Design Building many of their preconceived notions about building with wood will quickly dissipate.

First of all, the CLT panels being used on the UMass Design Building’s floors, roof and shaft walls are in fact strong enough to replace concrete, masonry and steel in industrial, educational and civic structures.

This is precisely because of the way they are engineered.

The prefabricated and customizable panels are created when 2x4s are placed side-by-side in layers, with each layer perpendicular to the one beneath it. The amalgam is glued together under high pressure to produce what can only be described as “plywood on steroids.”  These panels can be formed up to 19.5-inches thick, 18-feet wide and 98-feet long.

A second major misconception about building with wood concerns fires. Unlike steel, timber doesn’t soften or buckle in fires. It chars. This means that a fire will burn on the surface only, at a predictable rate. CLT beams are also aesthetically pleasing so most architects leave them exposed, meaning drywall or potentially flammable coverings are unnecessary.

Wood also insulates better than concrete and steel — CLT structures can use one-third the heating or cooling energy consumed by steel or concrete buildings.

Another major benefit is that, unlike steel and concrete, wood doesn’t produce carbon during the manufacturing process. Trees actually sequester, or absorb, carbon as they grow. One cubic meter of CLT has one ton of captured CO2 inside it, meaning a 7-15 story building constructed with CLT could be the equivalent of taking more than two million cars off the road for one year, according to the White House.

If all that wood were to remain in the forest, it would release carbon back into the environment after it dies and decomposes. This is one of the reasons many environmentalists now believe it’s better to sustainably harvest forests before trees die. 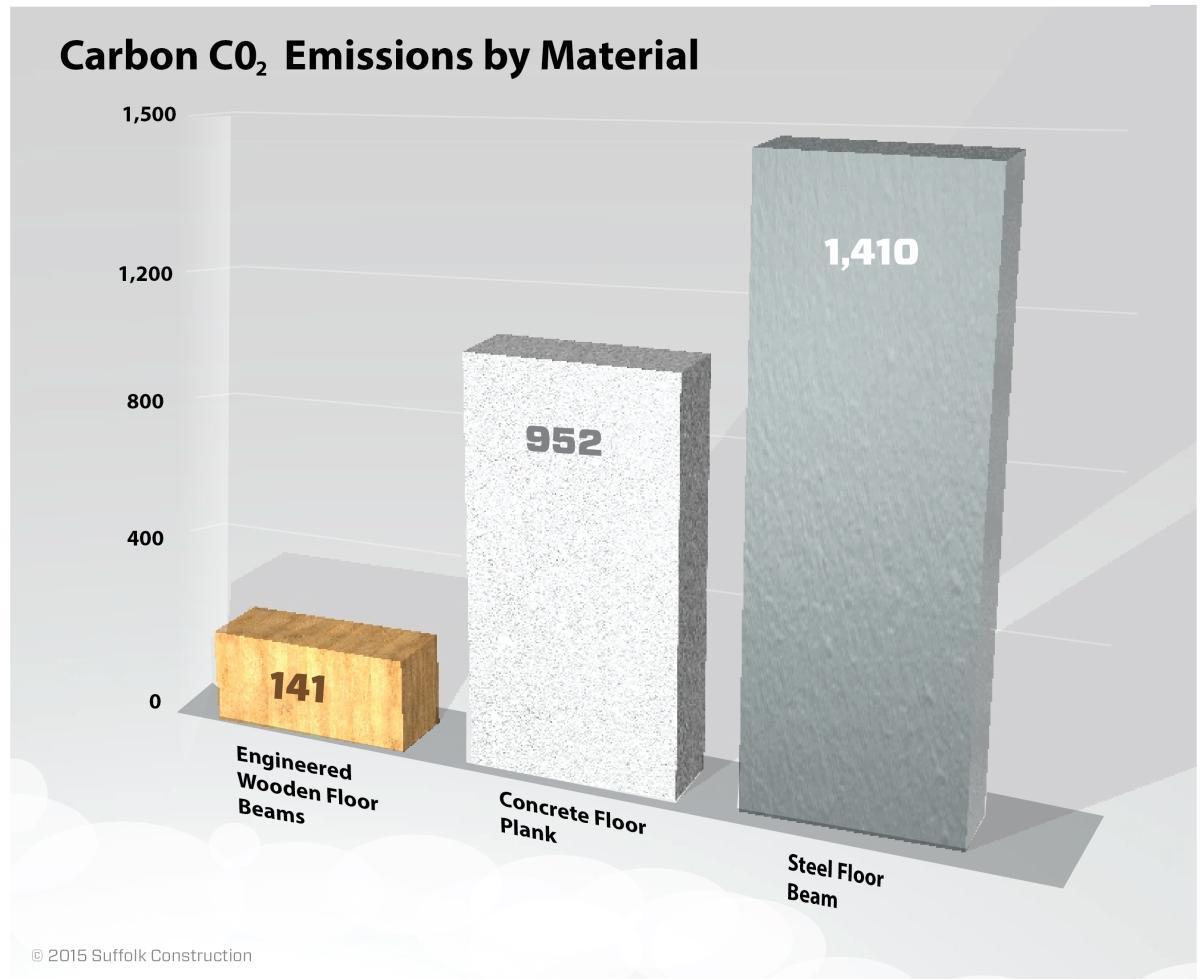 A study released last year in the Journal of Sustainable Forestry found that it takes significantly less energy to produce wooden floor beams than it does to produce concrete and steel beams. As seen in this chart, the process of creating wood for buildings emits much less CO2 than concrete and steel.

One day our local governments might adopt Wood First Acts like they do in British Columbia, Quebec and Ontario. Vancouver even grants developers additional parking spaces for building with wood. And even in the U.S., the Obama Administration just announced the winners of the U.S. Tall Wood Building Prize competition. The winners (pictured below), received $1.5 million apiece for their proposed wood towers in New York and Portland, Oregon respectively.

UMass Professors Alexander Schreyer and Peggi Clouston have studied, published and lectured about mass timber construction for more than a decade. Schreyer and Clouston, who both teach in the school’s Building and Construction Technology program, also lobbied school officials for a wood structure on campus for years.

They pushed for wood from early in the design stages of the Design Building, which was originally conceived as a conventional steel-framed building with concrete slabs. Eventually school officials were persuaded and asked Boston-based Leers Weinzapfel Associates to design the building in wood and Suffolk Construction to build it.

“The shape is actually very unusual for a traditional timber building in that there are a lot of cantilevers that you don’t find in traditional post and beam construction,” Tom Chung, Principal at Leers Weinzapfel, said before noting, “once this is built and people become comfortable with it that unknown risk factor will go down and that will contribute to this becoming more popular.”

But, after crunching the numbers, UMass realized it would cost about five or six percent more to build using wood because the prefabricators for this type of construction are still primarily based in Canada and Europe. The roughly $1.5 million shortfall was more than bridged after several elected officials, including former U.S. Congressman John Olver of Amherst, lobbied the state to kick in an extra $3 million.

“We were really happy,” Clouston said. “Being a new technology in the region, it needed some political push.”

Another hurdle, of course, was getting a variance to the state building code since the school is state property. Most building codes are based on outdated firefighting techniques that don’t allow for CLT panels to be used in heavy timber buildings known as Type IV construction, or large-scale non-residential buildings.

The 2015 International Building Code includes CLTs in Type IV construction, but no state in the U.S. has adopted those standards yet. Massachusetts will begin to enforce the new standards at some point next year and once the Design Building is complete Schreyer said he wouldn’t be surprised if other states follow suit.

“Our building will have a ripple effect,” Schreyer said.

Schreyer believes that it won’t be long before a 50-story wood structure is erected on American shores. And it’s not hard to imagine the owner and architect of that first “Plyscraper” stomping around the UMass Design Building for inspiration.

Wood constructed buildings outside the U.S. continue to create momentum for the wood movement. Check out a slide show of the world’s tallest wood buildings below: